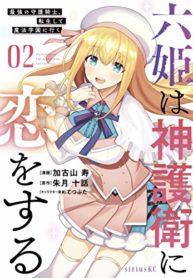 Seven empires have been in conflicts for a long time. Distressed about the wars, Arsmeria, the empress of the heavenly empire, deployed an [Armistice Barrier] at the borders of the seven empires. This, however, cost her her lifespan … A thousand years later, Lloyd, a child adopted by a Count’s family, is living happily with Myuria, his young and loving mother, and Kanon, his lovely younger sister. Lloyd is the reincarnation of Vance, Arsmeria’s escort knight. To search of his liege in this new world, and to protect her to the bitter end, Lloyd, along with Kanon, takes the entrance exam of the World Magic Academy. There, he meets a beautiful princess from each of the seven empires. Will he find his liege?